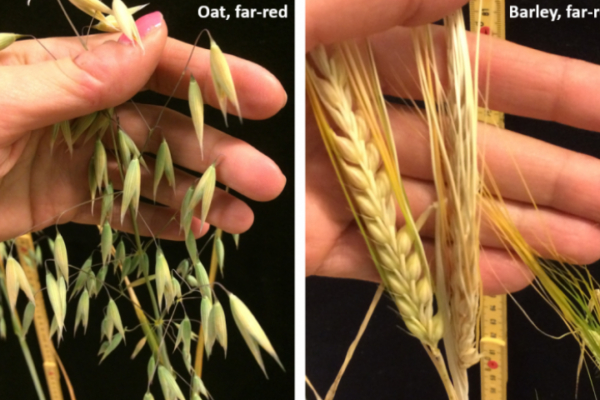 The main difference between barley and oats is that barley is a primary crop grown as a cereal grass whereas oats are a secondary crop derived from a weed of primary cereal grasses such as wheat and barley. Furthermore, the grains of barley are arranged in a spike while oats grow as small florets.

Barley and oats are two types of cereal grains used for human consumption and as fodder. Barley is used in many healthy foods including soups, stews, bread, and beer while oats are used as oatmeal and rolled oats.

Barley is a cereal crop of the grass family, producing one of the most popular cereal grains only suppressed by rice, wheat, and corn. Generally, barley is a whole-grain food. Therefore, the consumption of barley provides a high nutritional level. Moreover, it is rich in soluble fibre; hence, it can reduce both blood cholesterol and blood glucose levels. Besides, barley contains a very low amount of fat.

Furthermore, mostly, barley grow in temperate climates. It is a component of healthy foods such as soups, stews, barley bread, barley flacks, etc. It is also commonly made into malt. Moreover, it serves as a material for the fermentation of beer and some other distilled beverages.

Oats is a secondary cereal crop and is among many of the cereal grains that humans consume. It is popular as a type of healthy food due to its high nutritional value. Generally, it is rich in proteins, dietary fibre, B vitamins, and dietary minerals such as manganese. Also, due to the presence of beta-glucans, it can lower cholesterol levels. Typically, the daily consumption of oats over weeks lower both LDL and total cholesterol levels. Thus, in turn, it reduces the risk of heart disease. However, a protein called avenins present in oats may trigger celiac disease in some individuals.

Oats is a product of a weed of the primary cereal domesticates. Therefore, these primary cereal crops such as wheat and barley always contaminate oats products. Sometimes, it is important as livestock feed.

Similarities Between Barley and Oats

Difference Between Barley and Oats

Barley refers to a hardy cereal with coarse bristles extending from ears, cultivated especially for use in brewing and stock feed, while oats refer to an Old world cereal plant with a loose, branched cluster of florets, cultivated in cool climates and widely used for animal feed. Thus, this is the basic difference between barley and oats.

Furthermore, barley is grown in all regions around the world in any climate, while oats are grown in various types of soils in cool and humid climates.

Origin of the Crop

Above all, the main difference between barley and oats is that while barley is a primary cereal crop, oats are a secondary cereal crop.

Also, another difference between barley and oats is that barley grows in spikes while oats grow in small florets.

Barley is used to produce many healthy foods including barley flacks, soups, stews, bread, and beer, while oats are used as oatmeal and rolled oats.

Besides, barley is rich in dietary fibre, manganese, and copper while oats are rich in proteins and minerals. Hence, this is the difference between barley and oats in terms of their nutritional value.

Barley is a type of cereal crop grown in most part of the world. Moreover, it is a primary cereal crop of the genus Hordeum. It is rich in dietary fibre and minerals. We can use barley as barley flacks, and in soups, bread, and bear. Meantime, oats is a secondary crop derived from a weed in cereal crops such as wheat and barley. Generally, oats are good for lowering blood cholesterol. However, the main difference between barley and oats is their origin and importance.